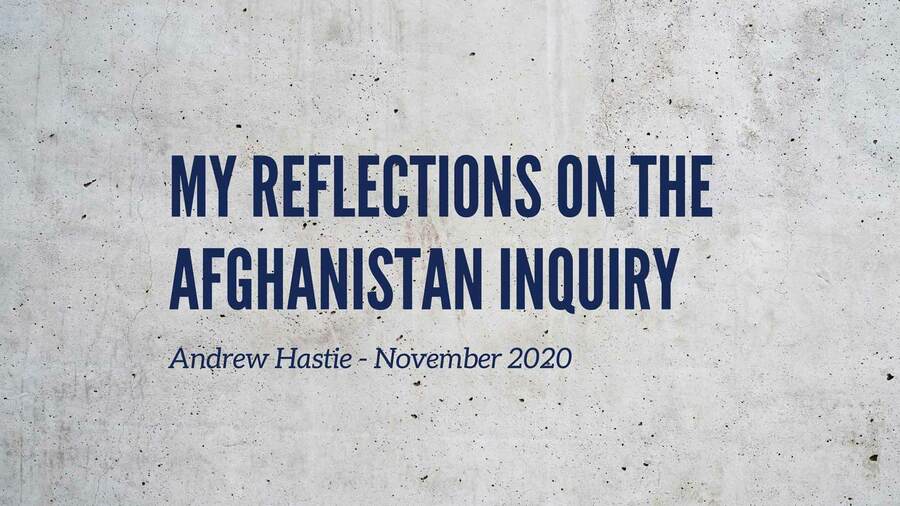 My Reflections On The Afghanistan Inquiry

As published in the Australian on 24 November 2020

Red rocky earth cut into our flesh, numbing our hands. It was well after midnight, perhaps 3am. Floodlights lit up the group. Cadence push-ups on bleeding knuckles in the dead of night is the sort of misery that either consumes you, or clarifies your sense of mission.

Corporal Ben Roberts-Smith, fresh back from the Battle of Tizak, towered over us, the 25 officer candidates on the 2010 SASR selection course. His displeasure writ large in his menacing body language. He switched out our hand position from palms down to knuckles.

An eternity passed as our fatigued muscles trembled close to the ground.

The irony might have been lost on him, but not on me. Humbling myself before Ben Roberts-Smith was not easy. Nor would be serving in the Special Air Service Regiment in the weeks, months and years ahead. SASR selection is an exacting experience. For an officer, your command, leadership and character is closely scrutinised for 21 days. They break down your body to see who you really are—what you are like when you’re tired, hungry and dejected.

Moments like this over the following fortnight thinned the ranks of officers. Men, gifted in command and planning, departed on their own terms—withdrawing quietly. Others were removed by the Directing Staff.

The rest of us pressed on, reaching a point of insanity in the final week. No food for days, almost no sleep, impossible physical tasks. What was the point of it all? The last week posed this question for those candidates remaining: when there is nothing left to give—who can go beyond and finish the mission? For the first time I understood Clausewitz’s dictum that war is a contest of wills. Finish the job, or fail.

We finished Selection on Friday 13 August 2010. When I called my wife to tell her, I wept. I was cold, shivering and spent. I’d lost 12 kilograms in three weeks and I had no emotional reserves. That day SASR Trooper Jason Brown died bravely—under fire—in Afghanistan serving with the Special Operations Task Group. It was a subdued mood back at Swanbourne. There were no high fives.

Starved, physically exhausted and emotionally shattered, we sat around a radio cleaning our rifles the next morning. We quietly listened to the voices of our Prime Minister Julia Gillard, and Leader of the Opposition Tony Abbott express their condolences at the death of another digger in Australia’s longest war.

That day set a course for me. I served in the SAS for the next five years, deploying to Afghanistan as a Troop Commander in 2013 as part of the Special Operations Task Group. I did not anticipate that ten years later I would be a Member of Parliament, explaining how we found ourselves in a dark place.

Like all of us, I am grieved by the findings of the Brereton Report, handed down by the Chief of the Defence Force. There is much to be troubled by: the report details credible information regarding allegations of unlawful killings by Australian soldiers. Specifically, 23 incidents of alleged unlawful killings of 39 people, perpetrated by 25 Australian Special Forces soldiers, mainly from the Special Air Service Regiment.

The report is hard reading. It is comprehensive, detailed and unsparing in its judgement on those alleged to have committed war crimes. As a former officer of the SASR and someone who believes in Regimental honour, I feel great shame in what has occurred. We were sent to Afghanistan in a double trust—to defend Australia’s values and interests by force, but also to uphold those values in our battlefield conduct. Many good soldiers honoured that trust; a small number of soldiers did not.

Many people want to know: how did this happen? Here are some personal observations on the Brereton Inquiry that are shaped by five years of service in SASR and five years as a Member of the Federal Parliament.

First, we have forgotten basic truths about human nature that previous generations of Australians better understood. We live in a bent world. We all carry man’s smudge: people do bad things. Christians call it sin in a fallen world. Enlightenment thinkers like Immanuel Kant called it the ‘crooked timber’ of humanity. Whatever name we give our condition, we should always guard against the reality of people doing bad things when they are left unaccountable.

The Australian constitution aligned our system of government to this realist view of human nature. The drafters understood the importance of the rule of law, the separation of powers and the need for accountability amongst those who serve in government. Our soldiers and officers are no different: they need accountability and firm leadership in the degrading cockpit of war. It appears this did not happen from the very top to the bottom of the command chain.

Second, we ignored the true nature of war and sanitised it. We pretended it was no different to any other form of unilateral government policy. But the reality is that war is inherently violent, escalatory and degrading. It is a modern conceit to pretend that war can be managed with a set of safe technocratic hands. The brutal reality is that no plan ever survives the first shot. People lose their way and become hard of heart, especially after multiple deployments.

During the Second World War, the Churchill government commissioned Laurence Olivier to make a technicolor film version of Shakespeare’s Henry V to boost wartime morale. Olivier edited out one third of the play, excising Henry’s violent speech demanding surrender of the Governor of Harfleur. King Henry, understanding the nature of ‘impious war’ once unleashed, posed the question:

What rein can hold licentious wickedness

When down the hill he holds his fierce career?

Shakespeare paints violent imagery of the ‘blind and bloody soldier with foul hand’ committing all sorts of atrocities. He saw that war has its own dark energy. He knew it consumes people in ways that modern society cannot comprehend, largely because we have packaged it up nicely for the evening news.

The Australian Defence Force was very effective at sanitising our longest war with its legions of Public Affairs Officers. The United Kingdom and the USA took a liberal approach, allowing reporters to see their soldiers at war. However, we stage-managed Australia’s contribution to Afghanistan through a carefully crafted information operation. This approach stifled public interest reporting. Perhaps with greater access for the Australian media, some of the events alleged by the Brereton Report might never have happened.

Third, parliamentary scrutiny of Defence is broken and needs fixing. Politicians routinely visited Aussie troops in Tarin Kot. I first met Malcolm Turnbull and Julie Bishop in 2009, on my first deployment with the 2nd Mentoring and Reconstruction Task Force. I harangued a Labor MP in 2013 about Defence budget cuts when he visited the Special Operations Task Group. Each of them were interested and supportive, but it seemed they didn’t know what questions to ask. I now realise this is partly a function of a deficient Parliamentary Committee system.

There is no independent Joint Defence Committee where tough questions can be asked in a classified, protected space. Parliamentary scrutiny these days is surface level. It amounts to senior Defence leadership presenting a few PowerPoint slides and giving parliamentarians a pat on the head. This is an area of urgent reform. If we are serious about increased accountability and transparency, then we need proper parliamentary scrutiny of the Department of Defence and the Australian Defence Force. Without it, our parliament can’t exercise proper civilian oversight of our military.

Fourth, the Brereton Report rightly condemns a warrior culture that fused ‘military excellence with ego, entitlement and exceptionalism’. Sometimes SASR operators carried themselves like modern incarnations of Achilles, Thor or Mars. I reject that culture, too. But I believe a warrior culture is an important part of an elite combat unit. It all depends on the beliefs and values you build that culture on.

When I posted to SASR as a non-qualified Captain in January 2010, I was befriended by the Unit Chaplain, a bloke by the initials of SB. He had an Irish temperament and liked to box, often with the operators. He was refreshingly confrontational, not a social worker in uniform. SB confronted what he called a ‘pagan warrior ethos’, shorn of any connection to the Just War tradition that has shaped our approach to warfare. As Saint Augustine wrote near the end of the Roman Empire, we must:

“In waging war, cherish the spirit of a peacemaker, that by conquering those whom you attack, you may lead them back to the advantages of peace.”

Our boxing chaplain was right. The warrior ethos I sometimes saw was about power, ego and self-adulation. It worshipped war itself. It was the opposite of the humility that I expected to find at SASR.

But there was a competing, more positive warrior culture at SASR, it just wasn’t the prevailing one at the time. If you looked closely, you’d find humble, quiet operators. Tough as nails. Fiercely competitive. Supremely competent at arms. The sort of bloke that you’d want next to you in a gunfight. They never thought themselves bigger than the team or the mission. They were humble. They were committed to truth. They were the ones who blew the whistle and repudiated the dark toxic personalities that have shamed the SASR in Afghanistan. Many are still serving quietly in the shadows.

So before people cry for a repudiation of all warrior culture, they should first understand what you need in an elite special operations unit. You need people who run to the sound of the guns. Who are prepared to fight and destroy Australia’s enemies. Who will die doing so, if necessary. Those men exist. They are serving at present. They have done nothing wrong. We need to uphold them and their vital mission. They will not be helped by soulless modern cultural theory, derived from the academic ivory tower. It may well diminish our effectiveness if shoe-horned and institutionalised.

Fifth, in the hierarchy of virtues, moral courage remains paramount to physical courage. The public record doesn’t reflect this as our military honours and awards system preferences the recognition of physical courage. Acts of conscience are hard to write up in vigorous prose and people rarely thank leaders who make unpopular decisions.

Yet there were acts of command moral courage during the period investigated by the Brereton Inquiry. History won’t record these good deeds the way it will the battlefield criminality of a few, but there were junior leaders at SASR who made hard decisions to uphold the sacred trust reposed in them by the Australian people. Leaders who took responsibility for their command. They know who they are and we honour them.

Finally, despite the Brereton Report, I still believe the profession of arms is a noble one. In any case, a survey of history shows us that war is part of the human experience. Australia has fought wars in the past; we will fight them in the future. We must be ready. And we cannot afford to lose. As Ernest Hemingway wrote, “I have seen much war in my lifetime and I hate it profoundly. But there are worse things than war, and all of them come with defeat.”

In July, the Prime Minister spoke of the post-pandemic world being poorer, more dangerous and more disorderly. We cannot afford to draw the wrong lessons from the Brereton Report. The mission of the ADF remains unchanged: to win our wars. We must prepare ourselves for the challenges ahead. But we must always hold ourselves to high moral standards. When wrong is done, we must hold ourselves to account.

That’s why I have supported the Brereton Inquiry: I love my country and want to protect it from those who would harm us from both without and within.